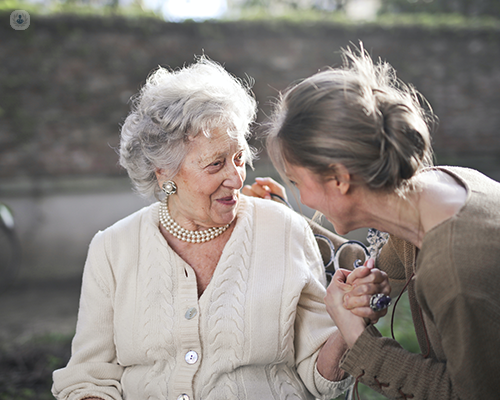 Dementia is the gradual loss of cognitive functions due to brain damage. This disease causes the inability to perform daily living activities due to it affecting several skills:

As the disease progresses, loss of orientation and identity can also be observed.

Dementia is a serious condition due to it affecting brain cells. Depending on the patient's condition, their symptoms and causes may be treated. However, once brain cells have been destroyed, it’s not possible to replace them.

If it’s suspected that you or a family member may have dementia, seek medical help as soon as possible.

The main symptom of dementia is memory loss, although it can lead to other symptoms that can appear over time, or all at once:

For the diagnosis of dementia, the specialist will perform a physical examination of the patient and review their symptoms. They may also perform complementary tests to find out if the dementia is caused by another disease. If so, they will assess the condition and carry out the most appropriate treatment.

What are the causes of dementia?

Dementia is caused by damage to brain cells and other diseases:

Some of the causes that can be stopped or reversed are brain injuries and tumours, long-term alcohol abuse, change in blood sugar and sodium levels, low levels of vitamin B12, normal pressure hydrocephalus, use of certain medications and brain infections.

Can it be prevented?

There is no specific method of prevention to avoid suffering from dementia. However, if a patient has suffered a head injury or brain tumour, they’ll be advised to see a specialist in addition to taking precautions to avoid additional trauma.

Some causes of dementia can be treated but once brain cells have been destroyed they cannot be replaced. Treatment can delay or stop damage to brain cells, but it will always depend on the individual patient and their condition.

When the cause cannot be treated, treatment is based on helping the patient manage their daily activities and reducing the impact of symptoms. Some medications can help delay the progression of dementia – a specialist will determine the type of medication according to each particular case. There are several drugs that can help alleviate symptoms or slow the progression of dementia, although they will not fight it.

Specialists in psychiatry or neurology can diagnose and manage treatment for dementia.

Any cookies that may not be particularly necessary for the website to function and is used specifically to collect user personal data via analytics, ads, other embedded contents are termed as non-necessary cookies. It is mandatory to procure user consent prior to running these cookies on your website.